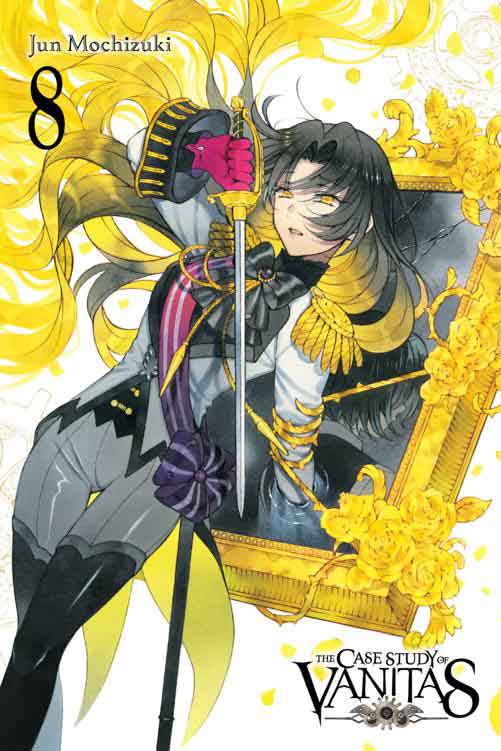 I hope everyone is doing well,
even if your days are monotonous.

Things are still good here,
as I can still do what I like.

A while back, I took a look
around Amazon, to check up on some titles I follow, and I was able to finally
place some preorders, with one of them arriving this week, which means that it
is time for me to get off my butt.

Today, I will be reviewing
that title, which is called The Case Study of Vanitas Volume 8 by Jun Mochizuki.

As I have given a series
synopsis in an earlier post,
I will not go over it again.

With Naenia gone from the
scene, Vanitas and the others finish up their business in Gévaudan, with
Vanitas experiencing something that frustrates him.

However, while things seem to
be a peace, various parties start to make a move and one of those parties has
come with a book that bears a strong resemblance to the Book of Vanitas, who
comes to find answers to nagging questions.

While I found the previous volume
to just be okay, things are not guaranteed to have gone downhill completely, so
I can at least try to remain fair.

And after reading this, I can
say that I kind of liked it.

From the moment I opened up
this  book and started reading, I found myself engrossed enough that I did want
to stop reading it, though things that interested me more did kind of distract
me.

One of the most important
things in a work of fiction is how things begin, as the beginning is supposed
to bring the reader into a new world, thereby giving them the temporary escape
that they desire.

While there are many ways to
draw in the audience’s attention, depending on the genre and the medium used to
present the work, this series, like many other manga, was originally published
in a serial publication, which means that each installment needs to pick up in
a way that makes sense, based upon where the previous installment concluded.

In the last volume, after
finding out that Naenia was actually the queen of the vampires, Faustina, Chloė
suddenly goes beserk and Vanitas, who finally got his book back, decides to
take action, with him ultimately doing so in the final panel.

In this volume, things start off
with Olivier and Roland engaged in combat, before transitioning back to where
things left off.

Even though I am not
particularly thrilled with how things began, mostly because I initially thought
Naenia was still around, no thanks to seeing no more than two volumes a year
from this series, this was the kind of beginning that I expected to see after
glancing back through the pages of the previous volume and seeing that Naenia
left the scene to seek out more vampires.

Thankfully, Square Enix, or
whoever they had put this volume together, decided to start the volume off in
the right place and Jun Mochizuki did not make the cliffhanger feel as
pointless as a cliffhanger in a Detective Conan volume.

Hopefully, future volumes
will be able to have a beginning more thrilling than this one, as that might
help to keep Jun Mochizuki from being a one hit wonder, but I would not be
surprised if Jun Mochizuki slips up with this series.

I also liked how there were
things to chuckle about in this volume.

One of the things that I
really like about manga, in comparison to many of mediums, is how many of the
creators seem to have a good knack at making things seem real.

Now, some of you guys might
be screaming at your screen, saying that it cannot be because it is fictional
and anime and manga tend to carry thing out to an extreme, but they fail to see
that much of the comedy found in the likes of American television rely around a
lot of things that would be awkward, though you do get moments where you can
laugh about how stupid the characters are being, not mention how little things
shift in tone, when the atmosphere is not always one tone or another.

However, with anime manga,
with things being all over the place in terms of tone, it feels like it is much
closer to reality.

Part of that shift comes from
the comedic moments that just seem to crop up out of nowhere, even if they are
overemphasized.

While this volume has nothing
in particular that stands out from the crowd, when looking at anime and manga
in general, it was still enough to make me chuckle a bit.

Not long after getting back
from Gévaudan, Noé notes that Vanitas has mostly stayed in bed and complains
about his chest hurting and Vanitas says that nothing is mentioned in medical
books.

When he talks to various
people, they tell him that he fell in love, to which he vehemently denies it,
saying that he only finds interest in people who find him repulsive, and the
object of interest does the say same thing, though does not deny that is what
is troubling her.

This made me chuckle a bit
because this kind of thing was obviously going to happen, with how many times
Vanitas went to Jeanne’s aide and how much he played around with her.

If things like this were not
included in the contents of this volume, I would have found myself disappointed,
as the comedy is usually a good draw when the content fails to appeal.

Thankfully, Jun Mochizuki
remembered to include moments like this, which helped to keep things
interesting.

Hopefully, the future volumes
will be able to include more moments one could laugh about, but seeing as comedy
can easily grow stale after a while, I would not be surprised if there is no
comedy to be found soon.

Another thing that I liked
was how there was a supposed down side to using the Book of Vanitas.

For the longest time in this
series, the Book of Vanitas just seemed too good to be true, as Vanitas, a
human, was using the book without experiencing any real consequences or
drawbacks, with the only possible down side coming from misuse, making it so
that things on the surface would be as boring as one of Touma Kamijou’s fights
in the anime adaptation of A Certain Magical Index.

Here, however, after things
in Gévaudan concluded, we see Vanitas staring at the markings on his arm that
we first see towards the beginning of the volume, noting that the marking have
spread and remembering the words Vanitas, or Luna, had told him.

While the words seem to
suggest that using the book does not itself make the marking spread, as the
memory refers to the power of the blue moon, as opposed to the book of Vanitas,
it makes me wonder if the marking will do something that will ultimately lead
to the point where Noé kills Vanitas, which I still do not consider a spoiler
because it was revealed that that was how things would end from the very
beginning.

Hopefully, these questions
will be answered as we get closer to the predestined ending, as how the power
of the blue moon rewrites people is still a mystery.

If this reveal had not
happened, I probably would have been okay, but it would be way too hard to
overlook how convenient the Book of Vanitas has been for 7 volumes without anything
going wrong.

Fortunately, Jun Mochizuki
remembered that things being too good to be true was rather annoying and
implemented a down side to using the book that Vanitas carries around.

The thing that I liked the
most though was how things ended.

As I have said a countless
number of times, another one of the most important things in a fiction is how
things end, as the ending is supposed to either leave the audience satisfy, if
the work is either standalone or the final installment in a series, or have the
audience want to see more, if it is part of a series.

In this volume, while the
beginning was kind of alright for what I remembered of the previous volume, the
ending really piqued my interest because it did its job so well.

Back in the previous volume,
the ending kind of fell flat because the cliffhanger and everything up to the
cliffhanger showed that things were nearly over, so it only really did it’s job
while actually reading the volume.

However, in this volume, the
cliffhanger and everything leading up to it all suggest that something is about
start up and I am anxious to get my hands of the next volume as soon as
possible, though I’ll likely be in for a long wait due to there only being one
or two volumes released every year.

If things ended like they did
in the previous volume, where everything was practically over, I would have
been greatly disappointed, as that would just show laziness on the part of
Square Enix, or whoever they had put things volume together, though Jun
Mochizuki, who is responsible for making the chapters, would also hold some
blame too.

Thankfully, good decisions
were made this time, which means I can give everyone involved in bringing this
series to whole world a good round of applause for a job well done.

Hopefully, future volumes
will be able to end just as well as this one did, because these kinds of ending
are what really attract eyes, but because Jun Mochizuki and everyone else
pouring their heart and soul into this series are human, I would not be
surprised if there are any volumes that fail miserably.

Outside of those things, I
cannot think of anything else I particularly found interesting, at least that
stood out as what was mentioned.

Because the volume start off
well, there were things to chuckle about, something was shown that will likely
bring about the predestined ending, which brought about some questions, and the
volume ended with a hint that something was about to begin, this was a decent
read.

Although there was quite a
bit to like, there are some issues.

However, aside from things
that are too minor to talk about, such as typos, nothing really seemed to
bother me too much.

As a result, I will have to
say that there is nothing worth mentioning.

Considering that there was
quite a bit to like and nothing to really hate, this was worth reading.

I mainly recommend this to
fans of The Case Study of Vanitas, as they will enjoy this the most.

As for everyone else, this
might be worth giving a try, but it might be best to read the previous volumes
first.

If you liked this review and
would like to see more, please consider supporting me on Patreon or SubscribeStar, or if you would like a copy of the reviewed title
for yourself, buy a copy of The Case Study of Vanitas Volume 8 from Book Depository, who offers free shipping to
many countries around the world, so that I can continue following this series
and possibly find more worth while reads for you guys to check out.