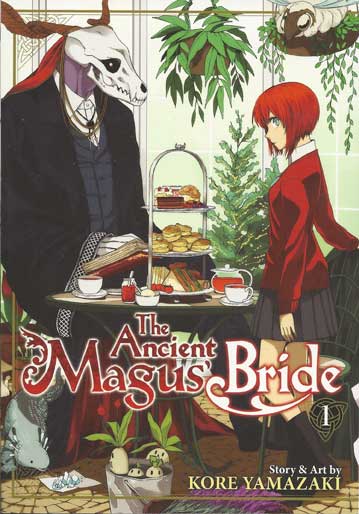 I was going to finally continue on with the last titles I got before my problem with Barnes & Noble occurred, but I made an unexpected trip to the book store and got four books, with half of them comprising a series I have not heard of before now.

Because of that trip, I will be covering one of the books that I recently got, which is called The Ancient Magus Bride Volume 1 by Kore Yamazaki.

Chise Hatori has not lived a happy life ever since her father disappeared and her mother died, as nobody seemed to want to take on the responsibility of raising her, and ends up on an auction block.

However, when somebody bids an exorbitant amount on her, her life is about to change as she enters a world that seems to be fading away with each passing generation.

I kind of liked this book.

From the very first moment I opened up the book and started reading, I was pulled into the story and did not want to put it down for any reason, though I obviously had to so that I could fulfill the needs that we have as human beings. This is what I expect from the first volume of a series and Kore Yamazaki delivers on that.

Out of the hundreds of books that I have read, whether they be in prose format or manga, I have encountered a few works that really could not hold my attention that well for one reason or another, whether that be because of the narrator and slow pacing, like it was with The Book Thief, or, in the case of the first novel in the Magical Index series, even though I am giving it a chance by reading more than just one or two volumes, it just felt tedious.

Due to the fact that they could not really hold my attention easily, I ended up not liking them very much, even if the publisher and author did not make mistakes as bad as what was done in Judge Volume 6.

Here, however, I did not get that feeling and it would seem to be quite a good replacement for Pandora Hearts, which ended its run recently and Yen Press will most likely be releasing the last volume next year since the 23rd volume will be released in December, according to Amazon. Then again, as this is only the first volume and my first time going through this series, I am not too sure that it can stand up to the kind of quality that I saw in that series.

I also liked how Seven Seas still seems to be pushing out good quality consistently.

Back in my review of Judge Volume 6, I was angry with Yen Press because chapters were repeated and even scenes were repeated without any reason, and led me to be very disappointed in them.

However, Seven Seas did not really make any mistakes in those areas, even in the works where they have no Table of Contents, which makes it even harder to notice such issues. I hope that they keep up this good work because it seems like they are doing things that a manga publisher should be doing, unlike Yen Press, though Yen Press can certainly still improve before the point where I really will stop buying their titles. After all, the author’s capabilities is not the only factor that determines whether or not a book is good.

The thing that I liked the most though was how easy it was to understand Chise’s position.

While not many of us get discarded by family and other people that would normally be concerned about our well-being, we all tend to feel unwanted in some capacity, especially considering how many women I see around me that want a relationship but do nothing but wait for the man to make the first move and even wear clothing that is uncomfortable to them.

Of course, when I get those feelings of not being wanted, it is usually my fault because I am not really that optimistic to begin with, though there are problems with being too optimistic, and I do not always ask for help when I need it, considering that I do have only one side of my body to utilize.

In Chise’s case, however, seeing and knowing how her relatives did not really want to take care of her, I can certainly understand how big of a deal it would be when random strangers like Ainsworth show her kindness.

After all, In my eyes, it would be as weird to me as if I could use every part of my body to its fullest extent after dealing with what I have to for at least two decades.

On the other hand, human beings are generally nice to begin with, so strangers being kind to others is not exactly a rare occurrence, even in our world.

Still that does not change the fact that how weird Chise thought it was that people were nice to her was pretty believable.

Outside of those things, nothing really caught my eye.

The fact that I was drawn into the story within the first few pages and that Chise’s situation was fairly believable, as well as the fact that Seven Seas continues to be consistent in quality with their release, made this book fairly enjoyable.

Although I liked the book there were some issues. However, aside from some minors typos and things that are expected to occur in the first volume of a series, I cannot really think of anything that really bugged me.

As a result, I will have to say that there is nothing worth mentioning.

Considering that there was a lot done right by both the author and Seven Seas and that there was nothing majorly wrong, this was definitely worth reading. I recommend that everyone give this a try because it did seem pretty interesting, though the work is a bit too new to really determine who would like it and who would not at this time.

What are your thoughts on The Ancient Magus Bride Volume 1? Did you like it or hate it? Was there something that you liked or hated that went unmentioned? Feel free to comment.