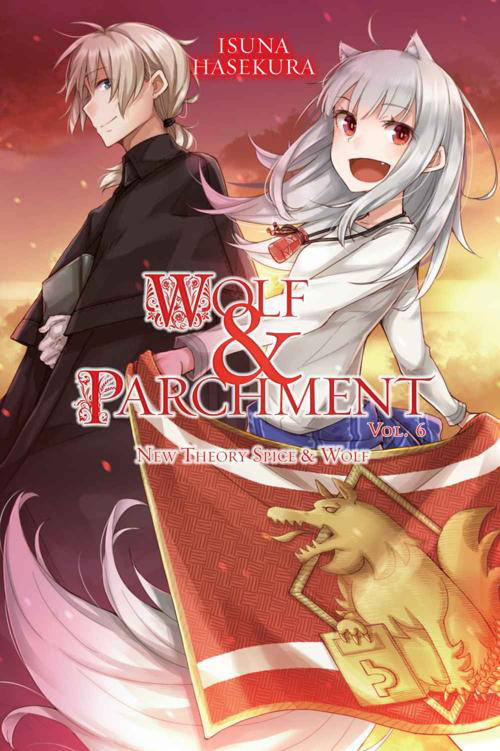 I hope everyone is doing well, especially now that things are getting
back to normal, even if we are the middle of the time of year wear it
can be most confusing with what afflicts somebody.

Things have been
going well here, aside from some stresses that cropped up, and I can
at least still do what I like.

A while back, Amazon
sent me their normally useless recommendations, with a
suggestion that was not bad, though I had forgotten about the series,
so I decided to place an order, and the book recently arrived.

Today, I will be
reviewing that title, which is called Wolf
& Parchment: New Theory Spice & Wolf Volume 6 by
Isuna Hasekura.

As I have given a
series synopsis in an earlier
post, I will not go over it again.

After having
obtained their own crest and Myuri being knighted, Col and Myuri are
summoned to investigate some strange rumors regarding an area of
utmost importance to the Winfiel Kingdom, which are suspected to be
of the byproduct of a deal with the devil, causing a newly appointed
lord troubles.

However, while the
duo’s purpose is to dispel the rumors, they find out that things
are much more delicate than they thought and must try to resolve
things in the best way possible.

While the previous
volume left me a little disgusted, due to how it felt almost as
pointless as an installment in the author’s previous work, it was
not bad enough that I felt like giving up this series completely,
though I am still on my guard.

And after reading
through this book, I must say that I kind of liked it.

From the moment I
opened up this book and started reading it, I found myself engrossed
enough in the book that I did not want to stop reading for any
reason.

As I have said
countless times before, one of the most important things in a work of
fiction is how things begin, as the beginning is supposed transport
people to another world, so that they can get the temporary escape
that they desire.

While this kind of
hook can be created in a variety of ways, depending on the genre and
medium used to present the work, this work is part of a series that
has been mostly been focused on adventuring, much like its
predecessor Spice & Wolf, which means that it needs to
start off in a way that makes sense, based off the previous
installment.

In the last volume,
Myuri and Col were talking a lot about crests, in the hopes of
creating their own, and finally decided on the crest towards the end,
after clearing away all the turmoil.

In this volume,
Myuri gets knighted and gets to finally present the crest meant for
her and Cole alone, and she starts demanding a sword, looking towards
a sword of the likes of something like Excalibur, if I were to put
into the kind of mythology we are used.

Seeing as Myuri has
been pretty much childish throughout much of this series, which is to
be expected, considering how she started out in this series, this
kind of beginning made it easy to get back into the groove of things
in the world and had me wondering just what kind of adventure she and
Col would be faced with.

If things had not
started off like this, I would have been rather disappointed, seeing
as there was no other real good way to start this volume.

Fortunately, Isuna
Hasekura had decided to start things off in a great way, though I
should probably give thanks to the supervisor he talked about in the
afterword for not letting it pass through without so much as thought.

Hopefully, future
volumes will start off just as well as this one did, but seeing as
Isuna Hasekura has disappointed me before, I would not be surprised
if things went downhill rather quickly after this.

I also liked how
things went in Col’s favor in a way he had not expected.

Even though I have
never really liked Col that much because this series presented him
one too many times as a Lawrence 2.0, rather than his own person, and
I am rather annoyed that he will not really question his beliefs,
though any religious people reading this review might admire that
about him, the thing that keeps me interested in this series is how
close its world is to our own world in believability, while
maintaining its own identity.

Throughout this
book, Col is trying to prove the innocence of a newly appointed lord
of accusations of heresy brought on by his predecessor, to try and
curry favor with the church, who, much like Col, disgusts me to no
end because of things that plague every other religion out there, and
when Col thinks he finally found a way out of the mess, by showing
that the previous lord was not a heretic, Col thinks that he lost the
battle, as the worst started to happen.

However, it is later
on revealed that the church backed off because the townsfolk knew the
truth from the beginning, rather than intending to go on a witch
hunt, as the priest probably would have liked, thus ending things in
a way that was likely the best possible outcome.

In real life, this
tends to happen quite a lot because there are always elements beyond
our control, even when you do things that play into the field
manipulation, like many religions, including Mormons, and because of
that there is a lot that plays upon luck.

In Col’s case, he
though that people, as expected of people in the setting of the
world, would likely side with the church, but Isuna Hasekura normally
does a good job in showing that the people of the world of the story
are good about thinking for themselves, unlike many religious
institutions that keep on telling people that they need to be fixed
or saved.

If Isuna Hasekura
had made things play out in the way that Col imagined, that would
have really ruined this world that he had created back in Spice &
Wolf and tried to explore again this world, which would have
likely angered many of the fans of Spice & Wolf who wanted
more adventures in this world, or even to possibly find out more
about the Moon Hunting Bear that keeps getting mentioned over and in
this series.

Fortunately, Isuna
Hasekura was able to keep that mostly realistic feel that I really
liked about Spice & Wolf, which makes me want to give him a
definitive passing grade here.

Hopefully, Isuna
Hasekura can keep this aspect of the series intact as it continues,
as it will keep coming people back for more, aside from his ability
to make the most mundane things seem interesting, but considering
that Isuna Hasekura did admit that he had to rewrite the story in
this book, I would not be surprised if the series suffers later on.

The thing that I
liked the most though was how much of a laugh I got out of the book.

Aside from enjoying
how the wold of Spice & Wolf is not really that different
from our own, with the exception of myths and legends in their world
turning true more often than not, whereas our legends and myths are
mostly fictional and take a lot of work to dig out any truths, I also
like how I can get a laugh out here and there, like I sometimes can
from real life.

While the dynamic
between Myuri and Col is not quite like Lawrence and Holo, seeing as
Col views Myuri as a child, while Lawrence mostly viewed Holo as an
equal, except in situations where he takes the complete burden on
himself, I was still laughing about their exchange, particularly when
it comes to Myuri wanting a legendary sword.

The funniest of
those moments is when Myuri says legendary swords include bones of
saints in the hilt, she wonders if she can have Col’s bones, due to
him having the moniker of Twilight Cardinal, and he says that is no
saint.

Now, I’m not too
sure of the entire process Col has go through to find his dream,
which is to be a priest, much like how Lawrence always dreamed of
having his own shop, so I could not get any laughs that only people
in the know would be able to experience, but it had me laughing
because Col would have more difficulties of his journey, depending on
what bones Myuri was referring to and that the former sword smith
they met said bones were used to remove impurities the metal.

Moments like these
help to make things interesting, even when what is being described is
rather boring, and if Isuna Hasekura had left it out, I would have
been rather disappointed.

Thankfully, this
aspect of the series remained intact, thereby allowing me give Isuna
Hasekura another passing grade.

Hopefully, more
humorous moments crop up as the series progresses, as I really want
to see where things go, as well as give the relationship between
Myuri and Col something to distinguish it from that of Lawrence and
Holo, as that will help attract people to this series, but
considering how the series screamed that it was trying to milk Spice
& Wolf‘s popularity in the beginning, I would not be
surprised if things grew as stale as the content after the sixteenth
book of Spice
& Wolf

Outside
of those things, I cannot think of anything else that I particularly
liked, at least any that stood out as much as what I talked about.

Because
this book started off quite well, had some funny moments, and had
events go in Col’s favor via unexpected means, this was a fairly
decent read.

Although
I liked the book, there are some issues.

However,
aside from things that are too minor to talk about, such as typos,
nothing really seemed to bother me too much.

As
a result, I will have to say that there was nothing worth mentioning.

Considering
there was quite a bit to like and nothing to really hate, unless you
want to be really nit picky, this book was definitely worth reading.

I
mainly recommend this to fans of Wolf & Parchment, as the
will like this the most.

As
for everyone else, this might be worth giving a read, but it might be
better to read the previous installments first, to be able to get the
enjoyment from the book.

If
you liked this review and would like to see more, please consider
supporting me on either Patreon
or SubscribeStar,
or, if you would like to check out the reviewed title for yourself,
buy
a copy of Wolf
& Parchment Volume 6 from Book Depository, who offers
free shipping to many countries around the world, so that I can
continue following this series and possibly find other worthwhile
reads for you guys to check out.