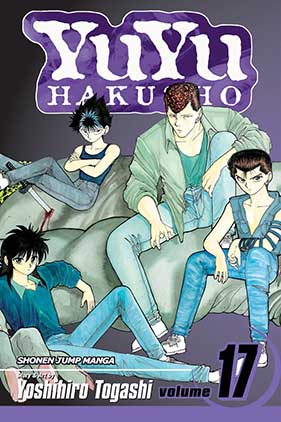 I hope that everyone is doing well, and not leaving things right until the holiday rush starts.

Things have been progressing relatively well here, even though things are not as desirable as they were before, and it looks like I may be able to get through my original estimate of when I would have completely covered all titles in my Amazon order.

So far, I have covered each of the 24 titles in that order, and, even with a unexpected break, I have finally reached the final three titles.

Today, I will be reviewing one of those books, which is called Yu Yu Hakusho Volume 17 by Yoshihiro Togashi.

As I have given a series synopsis in an earlier post, I will not go over it again.

The final battle between Yusuke and Sensui concludes, but Yusuke is unsettled by the outcome and is not content with his peaceful life.

However, when meets with Sensui’s predecessor for advice, envoys of the three strongest beings in the demon world come to have Yusuke, Hiei, and Kurama return to Demon World and each of those three have differing plans that may affect the human world, if they were to take power from the other two.

I kind of liked this book, though not as much as the previous volumes.

For much of the book, I did not feel like putting it down for any reason, even though I do have to take care of the same needs as everyone else.

While it was not as interesting as I had hoped, mainly due to how the previous volume ended, I am glad that Yoshihiro did not make things as boring as they were in the early volumes.

If he had not made the chapters found in this volume as interesting as they were, except for a few, I would have been a little angry because the antepenultimate and penultimate books in a series are supposed to give readers a reason to continue on towards the end, in addition to starting to explore the biggest mysteries of the series.

This one did just that by introducing new demons and revealing that they are nothing more than underlings.

I also liked how Sensui’s past was explored in a bit.

Yes, Sensui’s motivations and what drove him to become an enemy of mankind was delved into back in volume 14, where Sensui started to take a more active role, but how he got to those initial beliefs were only a guess, and, as I have stated many times, suspicions are not always the truth, otherwise a person who flees from the police will always be guilty.

However, in this volume, how Sensui’s beliefs started to develop became clear after his defeat.

Even though the path was kind of obvious from what was revealed already, hearing things in his perspective made me feel a bit more sympathy for him than when Koenma told the tale from his perspective.

This is why characters need the right amount of focus in a work, and seeing as Sensui was portrayed from the beginning as somebody that was once good turned evil, getting to know what he went through was very important, especially considering what happened after these events in Studio Pierrot’s anime adaptation.

Unfortunately, there are some writers out there who do not understand that because there are works out there, such as A Certain Magical Index Volume 3, that feel like it is lacking something, in spite of being rather enjoyable, and that keeps the work from being the best that it can be.

Maybe things will improve one day, but at least Yoshihiro did not make that mistake when he wrote these chapters, and that deserves quite a bit of praise.

Another nice thing present in this volume was how Kurama easily let his guard down.

Throughout the series so far, Kurama has been portrayed to be the brains of the group, suspecting everyone and everything, as well as effortlessly dealing with most of his enemies, seeing as Karasu gave him a run for his money, which made me think that he would always be on guard, but when he received a message from an old acquaintance, Hiei comes over and notes that Kurama did not sense him.

This was a moment to enjoy, because Kurama was raised as a human after he was cornered in his demon form, and like most humans, he should have moments where he is not so well guarded.

After all, he did not lower his guard for any reason, Kurama would be too perfect and the only reason to see what he gets caught up in would be to see him get utterly annihilated, just like how I wish that Touma Kamijou dies in every anime adaptation of A Certain Magical Index, even though Kurama is a more interesting character than Touma.

However, because Yoshihiro made Kurama drop his guard, I want to see what kind of history Yomi and Kurama, even though I do have a vague idea of what is because of my memories of what happens in episodes 95-112 of Studio Pierrot’s anime adaptation, and even gives him a reason for being involved in the last major conflict the characters will go through.

In fact, I want to start reading the next volume right now to find out their history, which makes me want to give some major applause to Yoshihiro.

The thing that I liked the most though is how Yusuke finally met with his demon ancestor.

During the events of the previous volume, Yusuke was revealed to have been descended from demons and everybody was scared of Yusuke reviving as a demon, but at that point in time, Yusuke’s revival as a demon felt more like a plot convenience than anything else because Sensui was so strong, in comparison to the members of Yusuke’s group and other allies.

However, now that Demon World is receiving a great amount of focus, it is starting to look like Yusuke Urameshi was meant to be a demon from the beginning, though, like Rurouni Kenshin, Yoshihiro may have been persuaded to changes his plans.

After all, if Hiei and Kurama were the only ones to be summoned to Demon World, I kind of doubt that we would be able to see what demon society is like and how their views, like ours, differ.

Not only does this meeting help in starting the exploration of various demon, beyond what was seen with Yukina, those found in the Dark Tournament, and Kurama, but it also allows for the possibility of finding out Yusuke’s true origins and the conversation the two have sets the stage for the next major conflict.

This is how an antepenultimate book should be written, and, even though there are some flaws that I did not expect to come up, Yoshihiro really delivers.

Seriously, series would be more interesting to read if the last three or so entries did not drop the ball, like they do.

Unfortunately, people do not realize that not everything needs a sequel because it is already complete, and until that it drilled into the heads of consumers and the entertainment giants of the various mediums used to tell stories, antepenultimate and penultimate books will continue that trend.

Outside of those things, I cannot think of anything else that I particularly liked.

Because my interest was held for much of the time that I was reading this and Yoshihiro did what was expected of what should be found in an antepenultimate title, such as setting things up for the last major conflict by having one of the three most prominent characters appear in person and talking to one of the protagonists, this book was fairly enjoyable.

Although I liked the book, there are some issues.

However, aside from things that are too minor to talk about, there was only one thing that bothered.

It took a bit too long to catch my interest.

While this problem is not exactly new to the series, the later volumes have all could grab my attention relatively quickly from only the very first pages.

However, in this volume, it seems to be worst because the beginning finishes up the Chapter Black Saga with the fight between Yusuke and Sensui.

Yes, Yusuke’s fight with Sensui is not as good as the fight with Toguro was, but it is still a pretty big fight in this series and I could not really get excited.

If I had to say why this contributed to making it less interesting, it was probably because how the series moved right into this fight.

Back in the previous volume, Yusuke and Koenma flew off to the Demon World and it gave me some bit of excitement to see the fight that takes place in this volume, though not as much as what episode 91 of Studio Pierrot’s anime adaptation gave.

Unfortunately, within the chapters in this volume, when Yusuke and Koenma arrives in Demon World, Yusuke has Pu descend and then apologize for being late.

Now, I am not expecting Yoshihiro to do things like Studio Pierrot did or say the same kind of lines that are found in FUNimation’s dub, but the banter and minor disagreement really took away from the excitement that could have been.

Honestly, moments like this is one of the reasons that I still find Studio Pierrot’s adaptation to be the better work, even though it too has its flaws.

Yoshihiro should have looked back and seen why the latter part of the Dark Tournament saga was so enjoyable in the manga, because this is letting me down.

Not only did the moments before the final showdown dampen my excitement, which may have been negated a bit if I had read this volume immediately after finishing the previous volume, but the fight itself was rather boring.

What happened, Yoshihiro? I know that is difficult to be able to maintain the quality of the previous volumes, but that does not excuse the fact that it took me more pages than usual to become engaged in a work.

Readers want to be pulled in right from the early pages, and considering that this series is now a fighting series, that means that the fights have to be interesting, so that the reader can be engaged.

Unfortunately, Yoshihiro seems to have either forgotten that or rushed the ending of the Chapter Black Saga, not that there was too much that was left for the saga to conclude.

Hopefully, the Three Kings saga and the manga exclusive content that is to come can raise the bar a bit, because everything after this volume may hurt the quality of this series.

However, right now, my huge hopes have been dampened a bit.

While there was only one problem with this volume, the fact that it exists this close to the end of the series hurt the quality of the book a bit and lessened my enjoyment.

Despite the fact that it took a while to really get into this book, Yoshihiro did enough right for an antepenultimate volume that it was worth reading.

I mainly recommend this to fans of Yu Yu Hakusho, because they would enjoy this the most and are probably likely to read this in a timely manner.

As for everyone else, this might be worth giving a try, but because this is the antepenultimate volume, I strongly recommend reading the previous volumes first.

What are your thoughts on Yu Yu Hakusho Volume 17? Did you like it or hate it? Do you think that Yoshihiro did a good job in bringing things closer to a close, like I did, or do you think that there could have been more that could be done? Was there anything else that you liked or hated that went unmentioned? Feel free to comment.